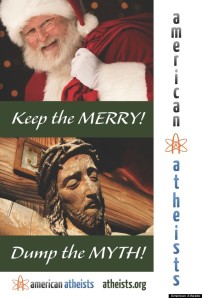 This past Tuesday, a billboard in New York City went up in Times Square. Paid for by the American Atheists, the ad features two pictures with captions. At the top is a jolly picture of Santa Clause, with a caption reading, “Keep the MERRY!” The other image is a grim-looking, crucified Christ, beneath which lies the caption “Dump the MYTH!”

David Silverman, President of American Atheists, says, “We know that a large population of ‘Christians’ are actually atheists who feel trapped in their family’s religion. If you know god is a myth, you do not have to lie and call yourself ‘Christian’ in order to have a festive holiday season. You can be merry without the myth, and indeed, you should.” Should we dump the myth? Absolutely! Just not in the way the American Atheists would hope.

Generally, only those with very little understanding of history actually think that Jesus was a mythical creation of the early church. I can think of only two people in the world who have earned PhDs in any relevant field who hold this view: Robert Price, who is a fairly radical member of the Jesus Seminar, and Richard Carrier, a historian who dabbles in religion. Both have written profusely on this issue, and neither makes a particularly substantive case. It is noteworthy that agnostic Bart Ehrman—well-known for his critical stance on the reliability of the New Testament—recently wrote a book defending the historicity of Jesus entitled, Did Jesus Exist?: The Historical Argument for Jesus of Nazareth

. As Ehrman states in the beginning of his book, virtually everyone believes in the historicity of Jesus, including critical scholars. In fact, for most scholars, the idea that Jesus did not exist seems not only radical, but unsustainable.

The situation with modern scholars is little different than that of their ancient counterparts. Of all those opposing the early church in the first few centuries of its existence, no one ever thought of denying the existence of Jesus. Some taught that he was merely a man, while others argued that he worked his miracles by the power of Satan. Interestingly, no one ever argued that he—or the miracles he performed—were inventions of the early Christians.

The idea that Jesus is merely a mythical person goes back to the 1800s (you can read an article I wrote about the subject here). At the same time, we must realize that the method of scholarship that drew that conclusion has long since been recognized as flawed and has been subsequently debunked. It is ironic that those who claim scholarship disproves the historicity of Jesus seem to be completely unaware that it actually recognizes his existence as a historical fact.

The most glaring error of Christianity’s critics is that the New Testament bears no resemblance to myth. What few may realize is that myth has a clear set of identifying markers: a cyclical worldview, a low view of the gods, a low view of mankind, the mysterious nature of the gods’ requirements of mankind, no single ethical standard, and the essentiality of conflict in creation, among others (you can read more about it here). Although it deals mostly with the Old Testament, a great book on the subject is John Oswalt’s The Bible among the Myths: Unique Revelation or Just Ancient Literature?

. Oswalt makes it abundantly clear that myth was not something the biblical writers produced. While the book deals mainly with the Old Testament, much of the material applies equally to the New Testament also.

It’s about time we dumped the myth: the cultural myth that Jesus never existed, that he was nothing more than an invention of the church, that his biographers were nothing more than fiction writers. If I could speak to those who put up the billboard in Times Square, I would say, “If you don’t like Jesus, then don’t believe in him. That’s your privilege, and your right. But do your homework before you put up a sign that demonstrates your inability to intelligently discuss matters of historical importance.” And I would not wish them “happy holidays.”

But I would wish them a merry Christmas.

3 thoughts on “Why We Should “Dump the Myth””