The early chapters of Exodus are some of the most exciting in the Bible. Not only do they record the action-pack story of the Hebrew departure from Egypt, but they also feature numerous connections between ancient Egyptian culture and the Hebrew Bible. Let’s explore some of them.

The Pharaoh who Knew Not Joseph. The pharaoh who lived close to the time of the exodus—whose name we will never know—saw the Hebrews as a threat, and for a good reason. The Hyksos (mostly Semitic invaders from a couple of centuries before) had taken over and ruled Northern Egypt for about a century. With the Hebrews living on the northeastern border, they could have easily aided potential invaders from Canaan. The king was right to be worried. 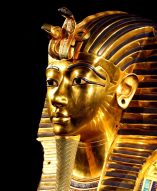 The Presence and Absence of Names. Egyptian sometimes refused to record the names of enemies. This was a way of magically destroying or annihilating their foes. By leaving out the pharaoh’s name from the text, Moses is not using magic (as it is denounced later in the law), but rather following a custom of not naming enemies. This highlights the names of three others: the two Hebrew midwives and God himself. The midwives are remembered for their righteousness just as the king is “forgotten” on account of his villainy. Refusing to name the pharaoh further highlights the disclosure of God’s name, particularly in Exodus 3.

The Birth Story of Moses. Many critics claim that some unknown biblical writer plagiarized the birth story of Moses from that of Sargon of Assyria. It is true that the stories bear some similarities, but that is to be expected. In riverine cultures like Egypt and those of Mesopotamia, families who could not afford another mouth to feed might put a newborn in a basket and set it adrift upon the river and pray that the gods watch over the safety of the child. In the West, it would be something like putting a baby on the doorstep of a church or an orphanage.

The Serpent Sign. The transformation of Moses’ staff is highly significant. First, it plays upon Egyptian stories of transformation. The message is that Moses could do what the Egyptian magicians could accomplish only by sleight of hand (they could make it appear that they had transformed staves into serpents—a trick depicted on the backs of ancient Egyptian scarabs). There is another message here, however. When the staff swallows up those of the magicians, it was sending a specific message to the king. To consume something in Egypt meant to claim its magical power. The swallowing of the other two staffs communicated the superiority of God’s power in a way that would make sense primarily in an Egyptian context.

The Ten Plagues. Each of the plagues targeted areas that the Egyptian gods were thought to control. Osiris and Hapy cannot keep it from turning to blood. The frog-headed fertility goddess Hekhet cannot keep the frog population from raging out of control. The powerful sun gods could not keep the sky lit. Finally, the pharaoh—who believed himself a god among men and called himself the “Living Horus”—could not even protect his son. God exposes the deities of Egypt as non-existent creations of human imagination. He also humiliates the arrogant and evil pharaoh who supposedly had the power to keep peace and order in the country.

Parting the Red Sea. This miracle provides the escape route for the Hebrews but is also reminiscent of a famous story about a lost necklace. A pharaoh goes out sailing one day with beautiful women to entertain himself. One of the women accidentally drops her necklace into the water. To keep the pleasure cruise from being soured, a priest named Dja-Dja-em-ankh parts the waters to retrieve the lost item. The difference between this story and the Red Sea crossing is the sheer power of God can accomplish in reality what could only be done in a fictional tale.

One a final note, we have to be wary of the sensationalism generated by amateurs who claim to have discovered evidence related to the Hebrew exodus. Movies like Patterns of Evidence have duped many viewers into adopting a fringe view of history and the Bible. Others have attempted to find the real Mount Sinai by looking in Saudi Arabia. Recent examples include the thoroughly-discredited Ron Wyatt and also the Doubting Thomas Research Foundation, the latter of which was recently featured briefly on the Glen Beck Program. Their efforts contradict the Bible and ancient Egyptian evidence and should be given no consideration whatsoever. Even more outrageous are the contentions that chariot wheels have been discovered on the bottom of the Red Sea, which appears to be a total fabrication as no such evidence exists.

2 thoughts on “Egypt and the Exodus”